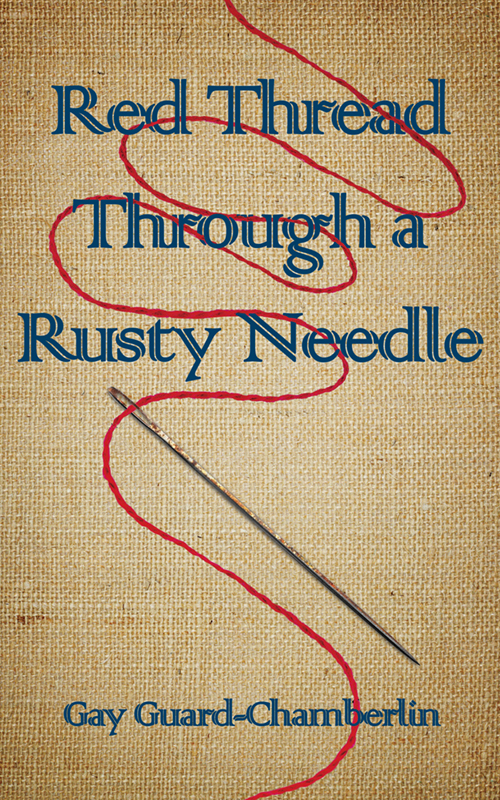 Red Thread Through a Rusty Needle is a collection of 36 evocative poems, melancholic and whimsical, that explores the natural world and the collapse of ecosystems, mothers and daughters, aging, the inner life of words, and the secret lives of ordinary objects. Read what crows have to say, how the park closes at night; hear the voice of a broom; remember girlhood; and try to banish those "Regulars," regret and dread, when they insist on showing up. Three of these poems won prizes in the 2019 Poets & Patrons Contest.

My mother & I have a book club.

It meets on one side of death,

When we meet at my place,

I give her bagels & lox,

When I go to her house, she serves me

Nothing on it but raw onion, cut so fiercely

my tears cry themselves.

I love these poems. Love is the word, not “like,” a term much too pallid to convey the luminous quality of the imagery, the straight-at-you honesty and candor of the subjects, the precise, often rapier-sharp quality of the language. These are not poems for the timid, capturing as they do the paradoxical intertwining of domestic and mythic, intimate and philosophical, keenly observant and musingly imaginative. These are poems for the times-in-between, when the way home winds a bit too crookedly, or when the fog rolls in too thick and fast. Gay’s poems are gifts for all of us in need of a phrase like “Don’t you see the whole world shining?” Exactly that.

Gay Guard-Chamberlin’s fine debut collection of thirty-six poems introduces us to a world that is specific and personal, but one that also touches on universal themes. The voice of a true poet is evident throughout, as is the studied gaze of an artist. Her language sings; her images stun...One can only step back and admire, again, the imagery throughout, the use of nuanced language that moves the poem forward with great verve, and the resulting emotional impact that lingers long after the page has been turned....There is an abundance of riches in “RED THREAD THROUGH A RUSTY NEEDLE”: family stories, homages, the joy of “ordinary things” such as “zipper teeth that meet and match,” post-election politics, and climate forecasts to keep you, the reader, turning and returning again and again to the pages of this outstanding book of poetry.

The thirty-six poems of Gay Guard-Chamberlin’s collection, Red Thread Through a Rusty Needle, are wide-ranging, touching on a buffet of subjects, including horses, dogs, and crows; parents and other relations; neighbors and emotions-as-humans; Easter eggs and politics (both electoral and inter-personal). They are highly personal and revelatory, but also imbued with a strong sense of universality.

Better still, they are also well-written, reflecting the author’s mastery of the poet’s craft. Form generally follows function, amplifying carefully chosen words instead of burying them. There’s nothing obscure in the imagery, and the text is free of the typos that seem to plague current small press productions.

The lengthy prose poem “Stella Maris” acquaints us with the wonderful character of Guard-Chamberlin’s grandmother, who “dated Johnny Weissmuller before he went to Hollywood and became Tarzan.” We’re told of a book Stella Maris’ father gifted her in a dream: “She swallowed the book and the little black seeds of letters sprouted inside her. When she opened her mouth, invisible words tumbled out. My grandmother fed me with sweet invisible words she grew inside her.” Such a way to be remembered and immortalized.

“Corporal” presents its subject in much less detail, but this simply allows the reader to complete the sketch by drawing on every veteran they’ve either known or seen in a film. The closing is beautifully vague:

Using thirty-seven precise words, “The Inner Life of Words” exposes heart, leaving us “listening // from the heart / of the heart.”

The narrator of “After Hearing of Your Suicide” examines both the resulting grief and their sense of culpability:
Did I notice? Did I listen?
or did I lean my head
at the right angle to convey attention,
then place a bookmark between your words
so my mind could wander off in the woods instead?

For readers who have lived in rural or smaller urban towns, “Shift Change” (p. 21) holds a most relatable, and carefully alliterative, verse: “Street lamps would flit on and off, fitful, / forgetful, an erratic glimmer along darkened / streets neon-lit by a few small shops.”

Out of fairness to the reader, enough; there’s not a single piece here unworthy of being pointed out. In the end, despite deeply plumbed wells, these are surprisingly gentle poems. There are no eruptions of anger at others or the narrator’s memories. Instead, there is honesty in these poems that is careful and caring. Out of fairness to yourself and the poet, add a copy to your library.

Gay Guard-Chamberlin is a welcomed voice to contemporary poetry, and her most recent collection, Red Thread Through a Rusty Needle, suggests that she has a long-standing affinity to traditional poetic forms, someone used to pushing her imagination to that point of fresh insight we expect from poetry. From the charming simplicity of "A Garment Worker's Song", the amusing self-reflection of "Lament" to her meticulous adherence to traditional structure in "Your Contract" and "My Mother's Keepsake," this book is a wonderful collection from a poet who deserves to be read more. 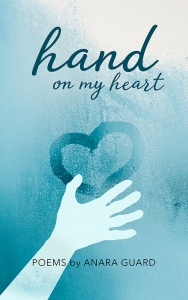 Hand on My Heart 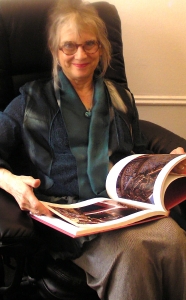 She has taught skills as diverse as self-defense/martial arts and paper-making to children and adults, and is a certified Interplay instructor. Gay has also worked as an office manager for an arts-in-schools organization, a waitress, childcare provider, and caregiver for people with dementia.

She lives on the North side of Chicago with her husband, musician-artist Doug Chamberlin.  Red Thread Through a Rusty Needle is her first book. She and her sister, Anara Guard, perform poetry together as "Sibling Revelry". Watch the video here.

Send Gay a message below: