View cart “Red Thread Through a Rusty Needle: Poetry by Gay Guard-Chamberlin” has been added to your cart.

When growing hatred and division unleashed by a recent election reach his high school, senior Eddie Barajas takes a stand against racism. Now, white supremacists are targeting him, and old fears rise up to haunt him, challenging all of his coping skills. What are the right choices to make, and can Eddie make them? In this stand-alone sequel to SHUT UP, where he was a victim of sexual abuse as a young boy, Eddie experiences his first love and learns what it means to be a true American.

“The latest volume in Reynolds’ popular True-to-Life Series from Hamilton High is the ripped- from-the-headlines story of Eddie Barajas from Reynold’s novel Shut Up. Now seventeen, he is a senior at Hamilton High. When he impulsively paints over incendiary graffiti on one of the school’s walls, he finds himself the target of a gang of white supremacists, who begin posting racist comments about him on social media.  And then, after he stops one of their number from fleeing after a racially motivated incident, he is actually assaulted by a group of them, leaving him with a concussion and other serious injuries. What will he choose to do: tell the police or take matters into his own hands? Reynolds does an excellent job of capturing the climate of bigotry and hatred that increasingly affects the lives of contemporary Americans in the wake of the 2016 election. Never didactic, her story is dramatic and compelling while her characters are fully realized and highly empathetic, especially Eddie and Rosie, the girl he meets and falls in love with. The combination of gentle love story and novel of gritty realism makes for a compelling read. The pull-no-punches novel is sure to excite discussion and — excellent for both classroom use and independent reading — it is a valuable addition to Reynold’s excellent Hamilton High series.”                      –Michael Cart, Booklist columnist and reviewer

There are no reviews yet.

Only logged in customers who have purchased this product may leave a review. 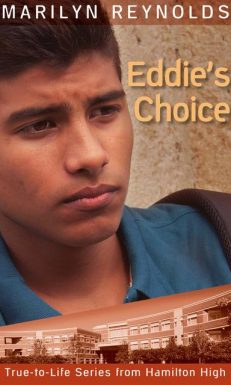