You may request signed or personalized copies at checkout in the order notes section.

“In this stunning debut novel, Anara Guard weaves together the fragments of a runaway girl’s life against the backdrop of 1970s Chicago. Her voice is lyrical and self-aware, lulling the reader into her character’s painful, beautiful world.”— San Francisco Book Review

Honorable Mention, Chicago Writers Association Book of the Year for 2022 in indie fiction

“This story of change, transformation, and growth captures not only the social and political milieu of the 1960s, but its pitfalls and opportunities. Readers who want a sense of what these times were like and the struggles experienced by those both within and outside of the system will find Like A Complete Unknown a vivid, thought-provoking story.” — Midwest Book Review

“Anara Guard writes with heart and power, and hers is a confident, moving novel. You will never think of Chicago in the same way again, or of what it feels like to be a desperate runaway teenager. Her remarkable characters face daunting challenges, realistically and freshly depicted against a backdrop of convulsive social change and pressing moral dilemmas. This book is an invaluable time capsule of the Sixties—Viet Nam, the demonstrations, the draft, the counter culture, Tarot cards, collectivism, the songs, the tastes and smells and colors of an era that altered the face of America. And yet, it is much more than that. Her novel also wondrously dramatizes the timelessness of new families, new lives, new starts, and new stories, such as the unforgettable Like a Complete Unknown.”—Joseph diPrisco, author of The Good Family Fitzgerald and chair of The New Literary Project 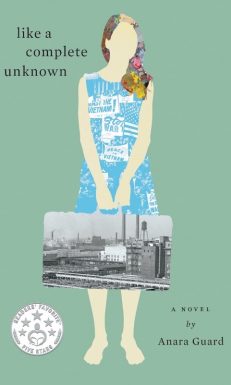 You're viewing: Like A Complete Unknown $18.99
Add to cart